Flu Shot In, Nasal Spray Out: What Families Need to Know About the 2016-17 Flu Season 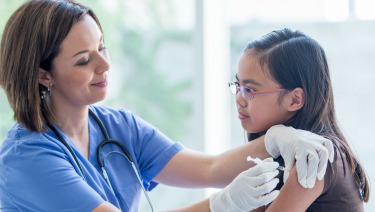 The American Academy of Pediatrics (AAP) recommends annual flu shots for everyone 6 months of age and older, including children and adolescents.

For the 2016-17 flu season, the AAP and the Centers for Disease Control and Prevention (CDC) only recommend the injected form of flu vaccine—the “flu shot.” New research shows that the flu shot provided significantly better protection in recent flu seasons compared to the nasal spray vaccine.

Caused by the influenza virus, the flu typically spreads quickly each fall and winter.  It can cause serious complications and even death in otherwise healthy children. This year, the nasal spray vaccine is not protecting as well as it should against certain strains of the flu, but we do know the flu shot does work to protect children from this dangerous virus.

Immunizing your child is the best way to prevent influenza and the serious complications that can result from an infection. Each year, on average, 5% to 20% of the U.S. population gets the flu and more than 200,000 people are hospitalized from complications. At least 77 children died from the flu in the 2015-2016 season, for example, although the actual number is probably much higher since many flu deaths aren’t reported. Being immunized every year significantly reduces the risk of a child being hospitalized due to flu.

Flu Shot In, Nasal Spray Out